HOCKEY SEASON IS IN FULL SWING, WE NEED TO SHOW SUPPORT FOR OFFICIALS

We hope you are all well and have enjoyed the first month of the season. As the weather turns colder, we want to make you aware of a very serious issue that all Massachusetts Hockey programs and leagues are dealing with - a severe referee shortage.

As you may be aware, at this point, a large number of referees have either not returned this season or left since the season started.

While we are still investigating and trying to determine the basis, our initial investigation has determined that the biggest reason cited is the abuse they receive from coaches, parents, and players. The constant harassment over calls over the split-second decisions they are making on the ice has taken its toll. Massachusetts Hockey is down 900 officials from pre-Covid season numbers​ to now​​. 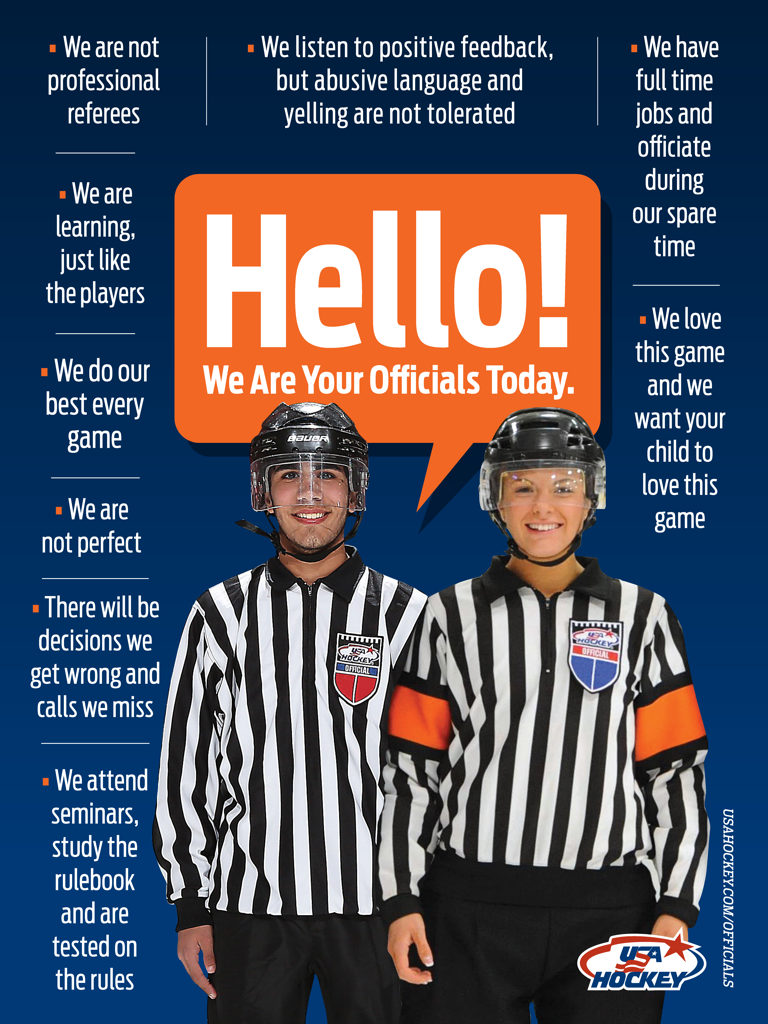 Since this season started, we have already experienced​ several troubling incidents, including: a referee ​needing a police escort​ after a 8U game; a young female referee quitting​​ in the middle of a set of games​ due to parent harassment​; a parent ​coming on the ice trying to get at a referee; and parent entering​ the scorer’s box to berate a player on the other team for a penalty against her child. These are just a few examples of what is going on every weekend.

The referee pool is dwindling, and we need to take steps in a positive ​manner to reverse this. Our officials are everyday people just like our parents, who have real jobs but try to work a side job to help our kids play a game, earn a little extra income and give back to the game. It would appear that many people, for whatever reason, have lost this understanding and somehow believe that our officials need to be at the same level as what they see on TV at the college or NHL level.

​Just as a player will turn a puck over or a coach make a wrong decision during a game, we realize that our officials can miss calls that may or may not have an impact on a game. That said - this does not give anyone (parents, players, coaches) the right to abuse them. Talk to your children about respecting the referees. Players should not be arguing every call against their team. Unfortunately, this is what is happening far too often and is unacceptable.

Massachusetts Hockey and USA Hockey have a Zero Tolerance Policy for abuse of officials. If someone is found abusing officials, including a player, coach or a parent, they will be subject to discipline including suspension and/or being banned from attending future games. In accordance with the Massachusetts Hockey Abuse of Officials (Zero Tolerance) Policy, any coach or player receiving an abuse of official game misconduct penalty is subject to an additional game suspension as a result of any game misconduct penalty, for a total of two games. Furthermore, if a coach or player receives a second game misconduct penalty under the Playing Rule 601 during the course of the same season, the coach or player will receive an additional two game suspension, for a total of 3 games. In addition, parents and spectators are subject discipline as well. Holding discipline hearing​s​ for parents is the last thing we want to do.

Again, we ask you to practice patience and good judgement. The children are all watching us and following our example. We all need to make a better effort to respect the officials and keep them working.

Lastly, if you or someone you know is interested in becoming an official, please visit https://www.mahockey.org/maofficials to start the process.